On-farm research demonstrates there’s an alternative time to get manure applied to corn.

By Melissa Wilson
The author is an assistant professor and extension specialist in manure management at the University of Minnesota.

This corn is being sidedressed with liquid swine manure using a dragline hose system.

In recent years, the window of manure application in the Upper Midwest has been limited by wet or unseasonably cold weather. Additionally, farmers with older-style hog barns have deep pits that fill up faster than they did in the past, so they no longer have a full year of storage and often look for somewhere to apply manure in the summer.

Sidedressing into a growing crop opens up an alternative window of opportunity. Studies of sidedressing swine manure into corn in Ohio have shown promising results, so we wanted to test it in Minnesota.

Trials in the field

In on-farm experiments near Le Sueur, Minn., we tested several nitrogen sources for sidedressing corn over two different growing seasons in 2018 and 2019. Our primary goals were to see if finishing swine manure could be used and if it could be applied with a dragline hose system. 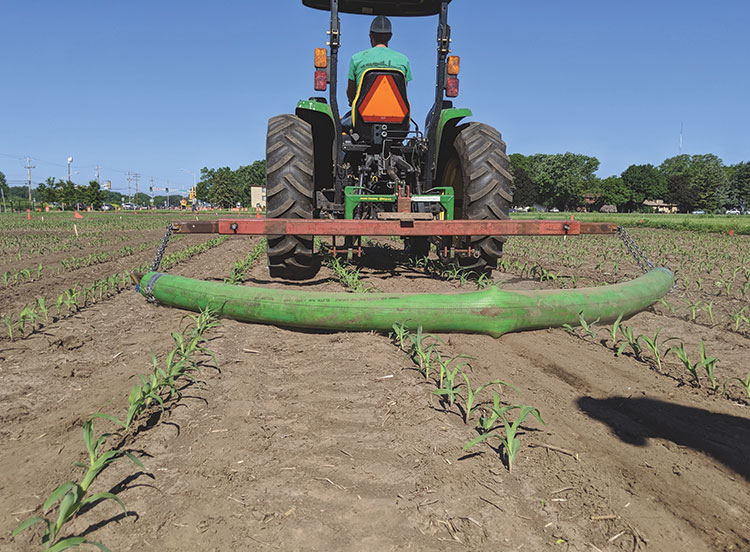 The setup used for dragging corn with a dragline hose at various growth stages.

Both years, we set up the experiment in second-year corn in a corn-corn-soybean rotation in a conventional till system. The corn was planted in early May with approximately 40 pounds of nitrogen applied with the planter. We sidedressed the corn in early June in large strips (about 24 rows) when the corn was at about the fourth leaf collar stage (V4 growth stage). Each treatment had four of its own strips randomly placed across the field. We aimed to get it applied before the growing point of the corn emerged (around V6). An aerial photo of the plots where corn was dragged at various growth stages from V1 to V6. The photo was taken in mid-July.

The sidedressed nitrogen sources included anhydrous ammonia and liquid urea-ammonium nitrate. The third source, finishing swine manure, was applied at around 3,500 gallons per acre with a drag hose system and a 12-row applicator (see photo on previous page). For all three nitrogen source treatments, we aimed to apply 140 pounds of nitrogen per acre (in addition to the 40 pounds of nitrogen applied with the planter). For the swine manure, we assumed 75% of the total nitrogen would be plant-available in the first year.

In addition to these three treatments, we also included strips where no nitrogen was sidedressed (the control plots). This was so that we could see if our nitrogen sources did, in fact, make an impact on the corn.

Both years were wetter than normal during the growing season, and we applied in slightly wetter conditions than we would have liked. Despite the issues, yield was similar across nitrogen sources in 2018 (see Figure 1).

The treatments in 2018 and 2019 were anhydrous ammonia, dragline liquid swine manure, liquid urea ammonium nitrate (UAN), or a control that didn’t have any sidedressed N. Yield is shown with a letter above the bar. If the letter is the same as the letter above a different bar, then the yield was not significantly different.

In 2019, after finishing the manure application, we realized that we had applied a slightly lower rate than intended. Based on our calculations, we applied about 90 pounds of first year N instead of the 140 pounds that we had aimed for. We also observed in the field that more soil clumps had been thrown up on the corn plants during application than the previous year, likely due to the wetter soil conditions.

These two factors were reflected in the yield that fall, though we suspect the low nitrogen rate was more problematic. The swine manure plots had a significantly lower yield compared to the anhydrous and liquid UAN plots. All three sidedressed nutrient sources were significantly higher than the non-sidedressed control, though.

What can we conclude from this research? When the liquid swine manure was applied at a similar nitrogen rate (first year available nitrogen) as the commercial fertilizers, the yields were similar. Therefore, we may have found an alternative window of opportunity to apply manure in Minnesota.

Deciding when to drag

After conducting the on-farm research in 2018, we had more questions. Is there a limit to the size of the corn that can be dragged with a dragline hose? Would this be impacted by corn hybrids?

In 2019, we started a small-plot research trial at a University of Minnesota research station in St. Paul, Minn., to answer these questions. The plots were four corn rows wide by 40 feet long, and each treatment was replicated four times.

We chose two different corn hybrids, one that tends to be more resistant to green snap issues in high wind (Hybrid A) and one that tends to be less resistant (Hybrid B). Green snap typically occurs between development stages V5 (fifth corn leaf collar is present) and tasseling due to rapid stalk growth making corn plants brittle. Corn is usually sidedressed at earlier growth stages, but it was thought these corn traits might be important for the crop when a hose is dragged over it.

Dragging treatments used a water-filled, 6-inch drag hose to mimic an application with slurry, pulled behind a tractor over corn at development stages V1 to V6. We also had a control plot that was not dragged with the hose. The photos to the right show the process and what the corn looked like later in the season.

This figure shows the impact of dragging a manure dragline hose over corn at various growth stages on corn yield. Hybrid A was Pioneer P0339R and Hybrid B was Pioneer P0306AM. Yield is shown with a letter above the bar. If the letter is the same as the letter above a different bar, then the yield was not significantly different.

In the fall, yield was collected (see Figure 2). This initial study suggests that corn can safely be dragged up to the V4 growth stage and that hybrid did not seem to make a difference up to that point. At the V5 and V6 growth stages, however, yield was significantly reduced. We also saw that Hybrid A tended to be impacted more by dragging than Hybrid B because yields were lower at V5 and V6.

We will continue the small-plot study for a second year. We are also starting a new, on-farm project to evaluate manure sidedress application timing. This spring, we used a tanker applicator to apply finishing swine manure at V1, V3, and V7 and will compare it to anhydrous ammonia sidedressed at V3. Keep an eye out for future updates!

We appreciate the partial funding for this study from the Minnesota Soybean Research and Promotion Council and the Minnesota Pork Board. We are also thankful to Bazooka Farmstar for lending us the toolbar for sidedressing and to Minnesota Valley Pumping Service for applying the manure. This article appeared in the August 2020 issue of Journal of Nutrient Management on pages 10 to 12.
Not a subscriber? Click to get the print magazine.

A reward for nutrient solutionsNext