Farming for a better future

Farmers often serve as the ultimate stewards of the land, and hog producer Rob Stout would certainly fit that description. 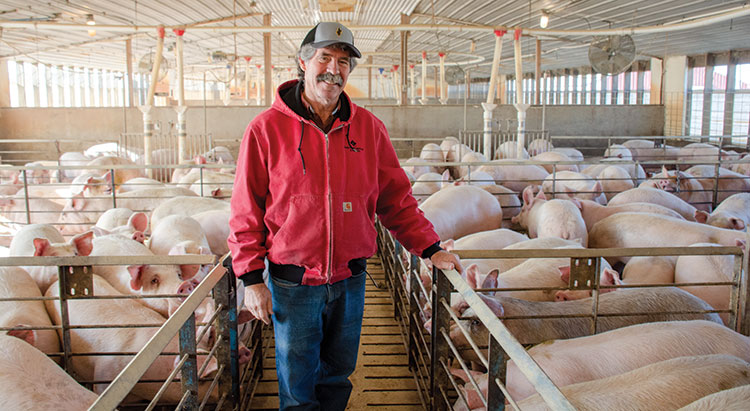 Rob Stout and his stepson, Alex Zimmerman, raise hogs and grow corn and soybeans at their Washington, Iowa farm.

At a young age, Rob Stout discovered his passion for animals and decided to become a farmer. Early in his career, he also became passionate about protecting the land for himself and for generations to come.

Stout’s agricultural roots run deep. He is a ninth-generation farmer and is the fifth generation to grow crops and raise hogs in Iowa. At one time, their family raised beef cattle, too, but today, Stout and his stepson, Alex Zimmermann, focus on feeding out hogs on their Washington, Iowa, farm. At any one time they have 3,600 feeder pigs in their barns, finishing out 9,000 hogs per year.

After graduating from Iowa State University in 1978 with an agricultural degree, Stout returned home to farm with his dad. About 10 years later, Stout began renting the land that now serves as the main location for the current farm. Back then, they used the facilities on that property to calve out beef cows, but when lightning struck and burned down that barn in 1997, they decided to sell the beef cattle.

A few years prior to that, in the early 1990s, Stout invested in a sow cooperative with nine other owners. They started with 1,200 sows. The cooperative is 8 miles north of Stout’s farm, with a nursery facility located at another site.

Twenty-five years later, there are six owners of the cooperative with 2,400 sows. They meet monthly to make decisions about animal care, breeding, and facilities.

Stout receives pigs from the cooperative when they are 9 or 10 weeks old. They are fed for around 18 weeks, and once finished, they are sold on the open market.

The pigs are housed 25 to 34 per pen, and there are about 600 pigs per barn. The barns are mechanically ventilated, and sprinklers turn on at 84°F to cool the animals in hot weather.

Stout works with a nutritionist to formulate 22 different diets — 11 for barrows and 11 for gilts. The females receive a higher level of protein in their rations. The automatic feeders are run on sensors, delivering small amounts of fresh feed multiple times per day.

Stout carefully observes water consumption and records the daily water intake for each barn. He uses these numbers to monitor animal health, noting that water consumption typically goes down a day before pigs become sick, indicating a problem.

Even though Stout has farmed all his life, his philosophy is to seek out opportunities for continuous learning. “This business changes so fast, you have to keep up or you’re falling behind,” the thoughtful farmer said.

When it comes to the land on their farm, Stout said, “I believe in soil health,” and he has certainly taken steps over the years to support that statement.

In addition to the hog operation, Stout and Zimmerman also have 1,100 acres used to grow corn and soybeans. They have been no-tilling the fields since 1983, after Stout attended some no-till tours put on by their extension director and encouraged his dad to give it a try.

“When I talked to my dad about it, he wasn’t so sure of the idea. He said, ‘You buy a planter, and we’ll give it a go,’” Stout explained. “And we never looked back.”

Over time, Stout has learned a lot about successful no-till. For example, he said it’s important to get residue out of the rows with row cleaners to prepare the seedbed. “The art of no-till is an evolving process,” he said. “I try to keep an open mind and attend a lot of continuing education.”

Stout commented that their view of manure has also changed over the years. “Manure was once considered a waste product, but then we became more aware of the value.” Complementing the no-till, they started injecting manure in 1996. Older low-disturbance injectors left the ground bumpy, he said, but the last two they have owned allow him to plant right after manure injection.

By injecting the manure, the odor is really minimized, Stout said. Still striving to be a good neighbor, he will avoid spreading manure on holidays and when the wind is blowing directly at someone else’s property.

To make the best use of the nutrients, Stout carefully tests his soils every four years in 2.5 acre grids. He uses that data to determine fertilizer needs, and manure is part of that package. Using manure saves Stout thousands of dollars in fertilizer costs and improves soil health.

Manure is stored in pits underneath their hog barns, and they try to get them completely emptied in the fall. Swine manure contains a lot of water, so it is less concentrated than some other manure forms. Stout tests his manure every fall, and it typically contains about 55 pounds of nitrogen (N), 22 pounds of phosphorus (P), and 35 pounds of potassium (K) per 1,000 gallons.

Stout complements the manure with variable-rate applications of commercial fertilizer, which is done by a hired applicator. Stout does this to fine-tune N, P, and K application.

Low disturbance injectors make a groove for the manure, then kick some soil over it. Stout and Zimmerman apply all of their own manure, about 1 million gallons each fall.

He also delivers nutrients to the field several times per year, through manure application, fertilizer applied with the planter, and by sidedressing growing plants, so that crops don’t get a full dose all at once.

“Spreading it out through the year is environmentally better,” he explained.

They also do the stalk nitrate test on growing corn to monitor nitrogen levels. “We are trying to do the right thing to make sure there isn’t too much nitrogen on a field,” he said. “I’m always open to improvements.”

Careful application means more nutrients stay on the fields where they belong. For the past eight years, Stout has been testing the water and working diligently to reduce nitrates in their area.

He belongs to the West Fort Crooked Creek Watershed Group, and it was through that organization that he initially received funds to do water nitrate testing. When he started testing, nitrates were at 14 to 18 parts per million (ppm).

The bioreactor on Stout’s farm was one of the first to be installed in the area. He tests the water monthly for nitrate levels.

He began planting cover crops to reduce nitrates and phosphorus in water. He said he started small but plants covers on all his acres now.

He also installed a subsurface bioreactor on a tiled field in 2014. The bioreactor intercepts drainage from about 70 acres. As water passes through the bioreactor, denitrifying bacteria in the wood chips convert nitrate into dinitrogen gas.

Stout tests the water at the inlet and outlet of the bioreactor monthly, and over the past five years, he has seen a nitrate reduction of 70 percent. Aside from one really rainy month, their nitrate levels now stay below 10 ppm.

The bioreactor is 30 feet wide, 90 feet long, and 6 feet deep. It contains 4 feet of wood chips, with 2 feet of dirt over that. Pollinator flowers are planted on top of it. In all, the bioreactor takes up about one-tenth of an acre.

Even with cost sharing through the watershed group, the bioreactor was a significant financial investment, Stout explained. Still, he was pleased they installed it as he felt they were “doing the right thing.”

Stout’s bioreactor was the first one installed in their area. So far, it is working well, and he hopes it lasts the 20 years it is expected to before the wood chips need to be replaced.

To further prevent runoff, Stout has also planted some native grass buffer strips to slow the flow of rainwater, snowmelt, and nutrients. “We do what we can to keep nutrients on the farm,” he said.

Solar panels are another environmentally friendly aspect of the Stout farm. The first rooftop solar panels were placed six years ago, with more added over time. Stout works with Alliant Energy on a net metering system, and the panels cover the electrical needs of the pig barns year-round.

Again, this was an expensive project to complete, with an anticipated payback period of six years. However, Stout was happy to do it and said, “Environmentally, it is a good thing to do.”

Much of what Stout does is to leave the land in better shape for those who farm after him, and he feels many other farmers are doing the same.

Stout plans to continue raising hogs and crops with his stepson. Maybe one day, one of his young grandsons will follow in his footsteps and farm the land he has worked so hard to preserve.

This article appeared in the February 2020 issue of Journal of Nutrient Management on pages 24 to 26.
Not a subscriber? Click to get the print magazine.

Connecting the dots with manure Previous
Also in Nutrient Management
Agreements Allow the Mt. View Sanitary District and Sanitary District No. 5 of Marin County to Diversify Their Annual Biosolids Planning
Use the four R's to guide your application strategy
Cover crops can be a bridge
By Abby Bauer, Editor
Connecting the dots with manure
First Thoughts: From problematic to promising
Greenhouse gas is only part of the puzzle
It’s not a debate over clean water
This manure is not like the others
Out in the field and down the drain